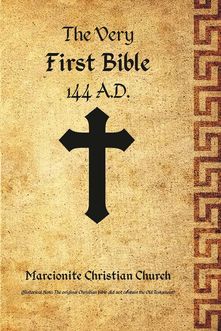 Now you can read the first Christian bible exactly as it was transcribed in 144 A.D. and one of the first things you'll notice is that it doesn't contain the Torah (Old Testament) or stories of its carnal deity. You will see the original Gospel of the Lord and Scriptures reveal God through Jesus, as it happened.

After 2,000-years of political editing, additions, deletions, theological focus groups and sloppy translations, the modern bible has more in common with modern art than it does with the very first Christian bible. This special first edition includes illustrations along with a Study and Reference Guide where you'll learn about the key people and events surrounding The Very First Bible and Marcion of Sinope, the man that religious scholars say is responsible for the creation of the New Testament.

His books and followers were hunted and destroyed by the full might and fury of the Roman Empire and two major religions in a scorched-earth campaign that spanned 1,000 years.

His crime? After transcribing the first Christian bible in 144 A.D., Marcion of Sinope proved that the carnal deity represented in the Old Testament was not the same Christian God we know in the New Testament. And for this there would be no forgiveness or mercy. Marcion is easily the most interesting and controversial figure you've never heard of. Until now. 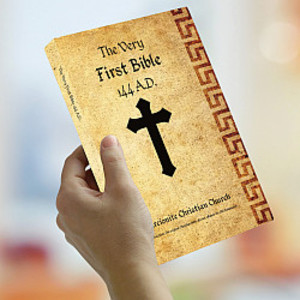 A.W. Mitchell serves as the Outreach Director for the Marcionite Christian Church and is a Society of Professional Journalists award winner.