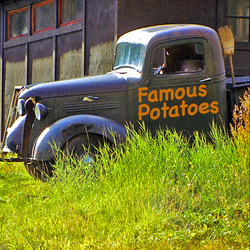 "An engaging picaresque novel of a young man on the run. A warm, well-told story of a likable character with a knack for being in the wrong place at the wrong time." —Publisher's Weekly

Willy Middlebrook is a nice boy from the suburbs, a Vietnam vet, a college drop-out majoring in Human Kindness. Framed for the murder of a cop, Willy goes on the lam from the law. With hopeful heart and broken balls he lives among the people of the humble cafes and dusty bars, underground: "They have rough brown skin and wrinkled eyes. They are round and they are usually dirty. They are hard because they have to be, but if you warm them they get soft and you can make them sweet." Famous Potatoes is a road novel with a touch of noir, a tall tale that has been called "exuberant, funny, and humane."

"Like the smudged chrome of a truck-stop diner, Famous Potatoes is an element of a new American realism, and Cottonwood has made it an engaging trip." —Chicago Tribune

The year is 1973. Back in those days only bad people got tattoos; long distance calls cost a small fortune; and an IBM 360 computer with a few hundred kilobytes was enough to run a bank.

As a young man, Joe Cottonwood used to hitchhike everywhere. Many of the encounters in Famous Potatoes are based on actual events from those times.

"Blessed with that wonderfully extravagant and original talent for telling tall tales, Joe Cottonwood weaves a whopper that catches you up and rockets you overland as Willy hitches himself on to one crazy adventure after another. . . Willy 'Crusoe' Middlebrook, anonymous fugitive, naive suburbanite, sexual suicide, husband on the run from Philadelphia and St. Louis to the sky-high Rockies of Idaho . . . " —Black Swan

"Philadelphia may never be the same again." —Cleveland Plain Dealer

This podcast is rated deep R for bad language and occasional scenes of funky sex. And a lot of joy.

Author's note: I wrote this novel forty years ago as a cockeyed love letter to the USA. I was a young man without children. Now I am a grandfather. A few of the passages, as I review them now, could make a grandfather blush. Nevertheless I have resisted the impulse to censor any youthful excess. I've also let stand the passages that would now be deemed Politically Incorrect. They are an accurate rendition of the times (1973).

We will send Famous Potatoes to your Kindle at .

Famous Potatoes has been sent successfully to your Kindle!