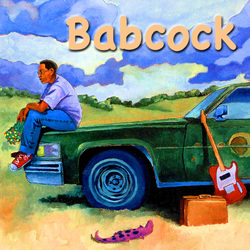 A fat boy with the blues. A skinny girl who runs marathons. And a con man on the lam. If you liked Clear Heart, or if you liked Boone Barnaby, you’ll like this one, too. The themes are a bit more grown up than Boone Barnaby, but it’s still family-friendly for reading. For any age it’s my brand of writing: humane, down to earth, good-natured, sometimes funny and sometimes sad.

Babcock plays electric guitar. He’s writing songs - and trying to figure out the true meaning of rock and roll - but he keeps coming up with the blues. Babcock is trying to start a friendship with a girl, Kirsten, who is as different as can be: Kirsten is skinny; she hates insects. And she's white. Babcock is fat; he speaks to dragonflies. And he’s black.

In some ways Kirsten is like a dragonfly: quick and bright. She never walks; she runs everywhere. Her family has money. Her mother thinks Babcock is a little too "rough." Opposites attract. But can they make music?

Babcock's father runs a car repair shop. At night, in the kitchen, he draws cartoons. Some day he wants to quit repairing cars and sell his cartoons. But nobody's buying.

Kirsten is hotheaded. Sometimes she needs protection - from herself. Her mother tries to protect her - from Babcock. For help with his problems Babcock goes to an unlikely source: his Uncle Earl, the man with good charm and bad behavior. But the biggest lessons from Uncle Earl - and, perhaps, from rock and roll - are not what anyone expected.

In short, it’s about character. About making music. About family, hard work, about love and loss. Sometimes there’s laughter. Sometimes the lights are off in the kitchen; papa’s got blues. But always life is rich and deeply moving…

I call Babcock a post-Obama novel. It’s about the friendship of a black boy with a white girl, and it isn’t about racial issues - well, not much. Have we really reached that point? Is our cup half full? The odd thing is, I wrote this novel in 1992 when nobody, including me, had heard of Barack Obama and when book critics wanted bloody racial conflict whenever black and white characters mixed in the pages of a novel. Maybe I was 16 years ahead of the times.

Babcock is part of the San Puerco trilogy, which makes it a companion book to Boone Barnaby: same characters (plus a few new ones) and more adventures in the scrappy little town of San Puerco. The book won awards as a novel for children, but it has many adult fans, too. Most of the issues appeal to an adult perspective as well as a child’s, though with different understanding. Other issues, of course, only a young person can understand. That’s life. That’s rock and roll.

We will send Babcock to your Kindle at .

Babcock has been sent successfully to your Kindle!