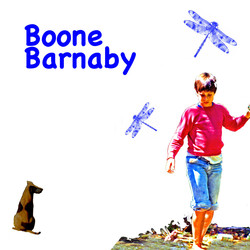 If you liked Clear Heart, I think you'll like this one too. It’s got great characters, it’s down-to-earth, it’s fun. And better yet, this one's friendly to children. Boone Barnaby is about three boys testing the limits of life in their scrappy little town. It’s about collecting garbage, climbing trees, catching a criminal, and talking to dragonflies.

Boone Barnaby lives in a small town full of large characters: San Puerco, California. There’s Boone’s father, who loves Studebakers and doo-wop, and who has a habit of walking around the dark streets of town late at night carrying a can of gasoline. There’s Boone’s friend Danny, who has nothing—sometimes not even a home—but who wants everything, even if he has to steal for it. There’s Boone’s other friend Babcock, who finds trilobites and organizes a picket line and looks like a wet coconut. There’s Walt, the soccer coach, who drives a Harley-Davidson motorcycle. And there’s Boone himself, who has a few problems: His soccer team is thrown out of the league. The dogcatcher is after Boone's dog. The town hoodlum is throwing rocks. Boone's father is arrested for burning down houses. The adult world doesn't seem fair, but with the help of his friends—Danny and Babcock—Boone tries to make things right and maybe learn just who he is and what he stands for.

Boone Barnaby is Part One of the San Puerco Trilogy, three award-winning novels that have been loved by adults and children alike, about the adventures of three boys in a town of cranks and dreamers—and adventurous children. “This warmly engaging story is resplendent with humor, irony, thoughtful introspection, and well-paced plotting." —School Library Journal.

Joe Cottonwood lives in the scrappy little town of La Honda, California, which has its own share of cranks and dreamers—and adventurous children. He has written four award-winning novels for children including the best-selling Quake!, four novels for adults including Famous Potatoes and Clear Heart, a book of poetry, and numerous songs. He has worked as a plumber, electrician, and carpenter and currently makes his living as a building contractor. He recently discovered that he has been writing podcasts all his life, though he didn’t know it until podcasts were finally invented.

(One note before you listen: The novel was written in 1988 before every house had a computer, every person could get a cell phone, and every mom drove an SUV. It was written when every President was a white man. It wasn’t all that long ago.)

We will send Boone Barnaby to your Kindle at .

Boone Barnaby has been sent successfully to your Kindle!