Rogues of the Black Fury 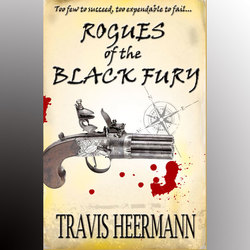 "Rogues of the Black Fury mixes a berserk action thriller sharp as a mercenary's sword with hard-bitten fantasy so gritty it might scour your bones clean by the time you're done." – Matt Forbeck, author of Carpathia and The Amortals

"Heermann's Rogues is epic, exciting, and a hell of a lot of fun! From the very beginning, the world he crafts feels alive and real. By the last page, I didn't want to leave. Adventure at its finest, honed to a gleaming bloody edge." - Marcus Pelegrimas, author of the Skinners series

"Bold, colorful characters pull the reader into an unforgettable adventure with the perfect mix of suspense, intrigue, and action." –Jeanne Cavelos, author of The Passing of the Techno-Mages

When a band of shadowy fanatics abducts Javin Wollstone’s little sister, Bella, from his care, his only hope to bring her home is turning to a hard-bitten band of special warriors, Commander Rusk and the Black Furies.

The Black Furies are infamous for their bloodthirstiness, their amorality, their unconventional tactics—and for their success.

Javin follows Rusk and his men as they charge through a maze of political intrigues, religious fanaticism, and centuries of racial distrust in a headlong chase across the high seas to save the girl’s life. Little do they know that little Bella Wollstone’s fate could be the spark that sets off a war of Armageddon.

Listen to Rogues of the Black Fury

We will send Rogues of the Black Fury to your Kindle at .

Rogues of the Black Fury has been sent successfully to your Kindle!