Sabina's Expedition to Stop the Apocalypse (Sabina Saves the Future #3) 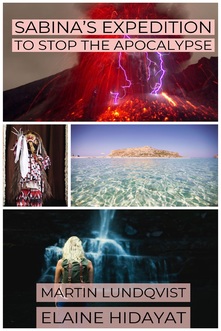 After many ordeals, Sabina faces her nemesis, Rangda. But will Sabina overcome the evil that she tries to stop?

Having stopped Pierre Beaumont's evil scheme, Sabina and Alex are recuperating in Hawaii.

Peace doesn't last for long though, as the mysterious Martin Al-Sham re-emerges. Martin's associates kidnap Alex, to force Sabina to help him with a dangerous expedition.

Martin reveals that he has found a way to re-energise the Zeto Crystal and that he needs Sabina to fulfil her destiny. Together they travel to Kiribati. First, they must scale an active volcano to re-energise the crystal. Then Sabina must swim down to the Sunken Pyramid of Kiribati, to enter the portal to the Divine Dimension.

Eventually, Sabina reaches Rangda. But will she be able to carry out her mission, or will she become the very evil that she tried to stop?