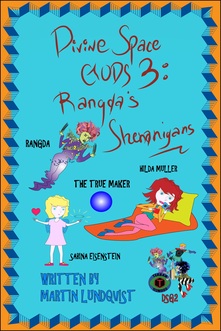 When the Divine Plan is stupid, humanity’s future is at stake.

Due to an unfortunate calendar mistake, the Divine Plan faces a hiccup. Instead of giving birth to the Chosen One, the Martian Rebel Keila Eisenstein unleashes the evil Space Demon Rangda Kaliankan and her army of man-eating Xenos upon humankind.

“Fortunately”, The True Maker, the supreme deity of the Milky Way Galaxy, has a plan for dealing with the new threat. To convince Keila’s ex Metatron to find a surrogate mother for his and Keila’s unborn embryo, so the Chosen One can be born and sort out the mess that the True Maker caused. Six months later, Sabina is born.

Meanwhile, the new German leader, Hilda Muller realises how to save Earth from the Xeno invasion. Since the Germans haven’t won a war in a millennium, she bribes the Xeno invaders with copious quantities of German beer, which saves Earth. Because of Hilda’s grand plan, she is promoted to planetary leader.

Having failed to invade Earth, Rangda comes up with a new plan. She allies with the Martian Madman Melchior Dorevitch and his cannibal army. Together they defeat Rangda’s ancient enemies the Zetans. After this, Rangda, and Melchior begins an odyssey around the Milky Way looking for the magical plot devices, the Zeto Crystals.

Eventually, Rangda has all the Zeto Crystals, and Sabina, as the Chosen One, has to face Rangda. But there is an issue… Sabina hasn’t trained and doesn’t seem very keen to carry out the Divine Plan.

In the end, only a miracle can save us!