The Alchemists Of Vra (The Velvet Paw Of Asquith Novels #3) 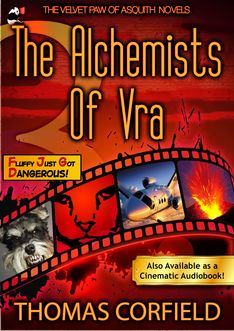 Consider a world inhabited with only cats and dogs: a society recognizable as our own, but with its eccentricities being the norm, rather than the exception. A world where the charm of Kenneth Grahame’s Wind In the Willows meets the exotic world of Ian Fleming’s Bond. A world where fluffy just got dangerous. These are the Velvet Paw of Asquith Novels, also known as the Dooven Books: welcome to the genre of New Fable.

When Oscar stumbles across an arrogant bard named the Dodosette and the beautiful cat Vaasi-Vee, he unearths a plot to plunge the world into darkness. After some begging, a lot of snow and an industrial-sized vat of soup, the three animals argue all the way to the infamous land of Vra to do something about it.

They did not, however, anticipate having to fight invisible Rottweilers, smash kitchens to pieces, lick frozen cars or fund taxi drivers’ sisters' eye operations. Although, for Oscar Teabag-Dooven, such things are not unusual.