The Ballad of Iron Percy 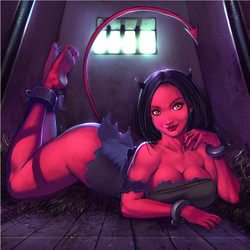 It has been twenty years since the island nation of Great Hale conquered the New World and became an empire. Lord Percival Wilmore, the Hero of Naruna Isle, has been the governor of the New Jucata since the war’s end, and it has been his life’s work to make the colony a peaceful and prosperous part of the Halan Empire. By all accounts, he has succeeded. The city-states of Old Jucata have been dominated utterly, the old religion has been completely supplanted by the Halan faith of the White Veil, and Jucatan goods have made Great Hale the envy of the world. He is beloved by the people, and he has ensured that this Halan colony is built to last.

But New Jucata’s future is not as secure as it seems. As the head of state for the colony, Lord Wilmore is the highest legal authority in the land, and he is called upon to try a most curious prisoner. The events and outcome of this interrogation threaten to tear Halan Rule of Law apart and bring anarchy to the region.

Pandemona stands accused of being a Pak Shar - a dangerous and seductive demon previously seen only in Veil mythology. With her scarlet skin, lithe tail, and dainty set of horns, she certainly looks the part. Her way with words and alluring demeanor only serve to underscore this perception. Under Halan law, the punishment for being a demon is death by fire at the stake, but Pandemona is entitled to a fair trial by Lord Wilmore and the colony’s Curate before she can be convicted and executed. This interrogation is her only chance to escape. She must use all of her wit and guile to survive.

Is Pandemona really what she appears to be? What is she here to accomplish? Is she an evil and subversive creature, sent from the Abyss to torment mankind? Or is she simply disfigured and misunderstood? Whatever the truth may be, her presence is not a good omen.

The Ballad of Iron Percy is a song of glorious triumph, written to honor Lord Wilmore’s victory against overwhelming odds in the Conquest War. It is an iconic tune in New Jucata. The specifics of the verses vary in each separate rendition, but the overall tone is one of bravery, achievement, and joy.

Unfortunately for Iron Percy, his Ballad is not yet over…

Listen to The Ballad of Iron Percy

We will send The Ballad of Iron Percy to your Kindle at .

The Ballad of Iron Percy has been sent successfully to your Kindle!