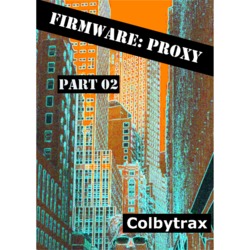 Podcast Audiobook
26 Episodes
408 Minutes Total
Podcast
This legacy Podiobooks.com title is only available as a serialized audibook in podcast form.

With his health failing, Isaac did the only thing he could think of: He ran.

He found a haven in a working class district of the City known as Little Russia.

There Isaac took on a new name: Ishmael.

Within hours of his arrival, he was embroiled in the affairs of a brutal member of the Lomidze organized crime family known as Leo.

Convinced by a longtime friend, Frankie, to flee from his commitments to the Lomidze family, Isaac found himself hunted by the ruthless Leo.

On a rooftop, far from witnesses, Leo murdered Frankie.

Only through the use of his skills as a hacker was Isaac able to drive Leo off.

Now wounded, alone, and far from help, Isaac depends of the kindness of strangers.

What do you do when the only way to save those you love is through the use of Proxies?

We will send Firmware: Proxy to your Kindle at .

Firmware: Proxy has been sent successfully to your Kindle!