by Dollie Llama and ThornDaddy 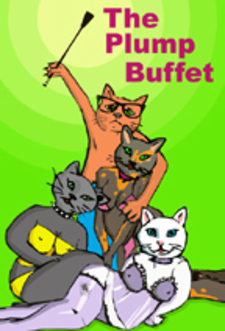 WARNING: "The Plump Buffet" is comedic literature with sexual motifs. If you are not of legal age, you should not listen. You should also not listen if literature with sexual motifs is not permitted in your community. You are also not to listen if you are easily offended by such material. But compared to network TV, it's a wholesome story… no one dies.

-THE PLUMP BUFFET: it's not a love triangle, it's a love polygon.

–THE PLUMP BUFFET is "Fritz the Cat" meets "Showdown at Waco."

–50 women aren't 50 times the fun, they're 50 times the hassle. And one of them always feels like killing you.

CREDITS FOR THE PLUMP BUFFET:

Story by ThornDaddy and Dollie Llama.

Thanks to marion (House Of Reason), Illicit Shane, and Erin for audio proofing help.

ABOUT THE AUTHORS: ThornDaddy and Dollie Llama are an ecstatically married couple living in Southern California. They did the Podiobook Diary of an S and M Romance.

Listen to The Plump Buffet

We will send The Plump Buffet to your Kindle at .

The Plump Buffet has been sent successfully to your Kindle!