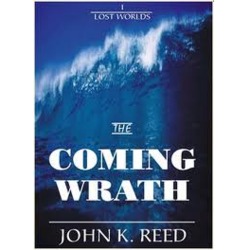 Podcast Audiobook
42 Episodes
1277 Minutes Total
Podcast
This legacy Podiobooks.com title is only available as a serialized audibook in podcast form.

A world lost in time and history. The earth as it was before the world wide flood destroyed the face of the planet almost five thousand years ago. In the Coming Wrath, you will confront the problem of evil, and the core of evil that is rooted in your own heart.

You will experience the tsunami nightmare of the beautiful Madrazi. Why has she been chosen to become the wife of Shem, Noah’s oldest son? She soon learns that Noah received a vision of God deep in the forest. The evil of mankind has overwhelmed the world, and the Creator will now act in judgment by sending a global flood. She cannot believe that the Creator would bring judgment on all the people around her. Madrazi will be strong, and will help her husband start a new life after the prophecy fails.

You will meet Jared, the battle commander, who believes in honor, duty, and courage. He does not trust in merely taking refuge from the evil threats. Jared is determined to build up the army to defend his beloved city.

Sechiall is the young man adopted by Jared, brought up by him in the ways of military science. Sechiall has his own plan for the city, a plan to become King!

The Coming Wrath. You will walk with Madrazi, Jared, Sechiall, Noah, and many others, in this Lost World before the Flood. You will experience the hammering sounds of ark construction, the slaying of a dinosaur, one-on-one combat, men dying in battle, action on the high seas. Be with Madrazi as she meets the Creator in the depths of her soul.

The Coming Wrath is the first book of the Lost Worlds Trilogy. Authored by John K. Reed. Narrated and Produced by Marko Malyj. Visit us at http://LostWorldsTrilogy.blogspot.com.

Listen to The Coming Wrath

We will send The Coming Wrath to your Kindle at .

The Coming Wrath has been sent successfully to your Kindle!