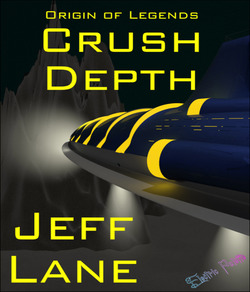 A novella by Jeff lane called Crush Depth starts off his Origins of Legends series:

Marylou Kelsum is a young scientist about to embark on the journey of a lifetime on-board a first-of its-kind research submarine on its maiden voyage to the bottom of the Atlantic ocean.

But not long after they get under way, Marylou’s professional dream come true turns into a nightmare. A face appears, looking into her cabin porthole at the impossible depth of 5,000 meters below the ocean’s surface. And worse, she thinks she recognizes the face as that of a fellow crew member.

From the mind that brought you This Paper World and ONE WAY, Jeff Lane now invites you to dive to deep into the dark, cold waters of… Crush Depth.

Crush Depth is narrated by the author and brought to life with a full cast.

Music by Stephen Parker in The Wilderness Studios

We will send Origin of Legends: Crush Depth to your Kindle at .

Origin of Legends: Crush Depth has been sent successfully to your Kindle!