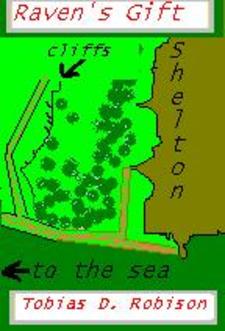 When Raven comes to Redthwen to meet her mentor Orvannon, she encounters a vicious traveler, a hag with an extraordinary Voice of Command, and that hag's charge, a mysterious little girl. By the time Orvannon arrives, Raven will have learned too much about these strangers, and she will have discovered a dragon with the ability to put people into a swoon.

Orvannon's instructions start Raven off on an epic adventure. She will master the greatest bit of nose-magic in all of her native Ausland. She will face the dragon in combat. And she will have to deal with the hag while totally under control of that woman's power. These adventures lead to more, as Raven discovers how the great city of Shelton is under attack. She must use all her persuasion to bring a powerful wizard to the city's aid, and she will find that facing up to the attacking army is not enough.

Raven explores the magical caves created by three great wizards, eventually discovering the greatest evil of her time. Victory in the "big boss battle" is not enough. When the evil magic is destroyed, Raven and her friend must avoid starvation, and face the lightning bolts of yet another mage, to have a chance of staying alive in peace.

Raven's Gift is set in a magical, pastoral medieval world. Raven has a strange ability that is as much a curse as a gift. Trouble follows her every step, and danger approaches at every turn. She begins her journey with only her wits and her nose, but though her past haunts her, she finds companions who help her make amends for a terrible mistake.

Raven's Gift is a dramatic fantasy with an unusual heroine and intriguing magic. With Raven's deep bond to nature and her pragmatic attitude toward the obstacles in her path, she manages to find her place as destiny's unsung hero in her dangerous world.

One reader has said that Raven's Gift is like South Park mets James Bond meets Dungeons and Dragons. Although there's combat and even a military campaign in this novel, much of the action occurs in lively conversations. Even today, at the beginning of the 21st century, it is impossible to imagine making Raven's Gift into a movie – for an unusual reason – but if such a movie could be made, some parts of it might earn an R rating for being a bit earthy.

We will send Raven's Gift to your Kindle at .

Raven's Gift has been sent successfully to your Kindle!