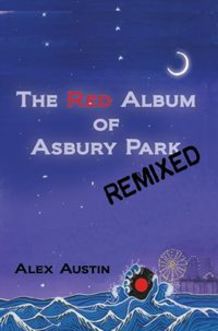 Would you like some music to go with your story? Alex Austin hopes you will. He’s integrated the work of 20 contemporary bands and 40 songs into The Red Album of Asbury Park Remixed.

It’s the late Sixties, the Beatles intact, Jimi Hendrix exploding and the Doors demanding the world. And on the East Coast, famed resort Asbury Park, New Jersey, will become the epicenter of a new brand of rock and roll.

But in January 1968, a boardwalk Liverpool lies in the future. Escalating crime and a fading reputation have shaken the City by the Sea. Asbury is at tipping point,

Cast down into the fading resort on a bleak winter night, 22-year-old musician Sam Nesbitt wants to be big—Jimi Hendrix/Eric Clapton big—but he has to survive Asbury first. Witnessing the tail-end of a murder on his first night in town, Sam keeps his distance from the crime’s investigation. But the murder will crash back into Sam’s life.

As Sam pursues his dream of glory, he rides a roller coaster of triumphs and defeats. He’s the outsider who can’t break in, he’s the guitarist that every band wants. He’s a working class hero, he’s a pawn in their game. He’s a dream lover, he’s breaking hearts.

The Asbury music scene is the Wild Wild West: Shootouts on Main Street and rock and roll showdowns on Ocean Boulevard. In this increasingly surreal town, the Atlantic seems to be casting off a new band each day. They wash up on the boardwalk feet flocked with sand, water dripping from their guitars, looking for the stage, looking to face down the local talent.

So Welcome to The Red Album of Asbury Park Remixed, where Madam Marie’s not talking, Mr. Peanut’s not pushing Planters, and if you’re out after midnight you better be carrying a six-string.

As in the novels of Richard Ford, Tobias Wolff and Jayne Anne Phillips, The Red Album of Asbury Park Remixed uses a matter-of-fact tone, blunt, realistic dialogue, and graphic descriptions of violence to reflect Sam’s world. Woven into the story are songs of contemporary Asbury Park musicians. Songs of passion, struggle, chaos, longing, love and dreams.

Listen to The Red Album of Asbury Park Remixed

We will send The Red Album of Asbury Park Remixed to your Kindle at .

The Red Album of Asbury Park Remixed has been sent successfully to your Kindle!