The Mask of Inanna 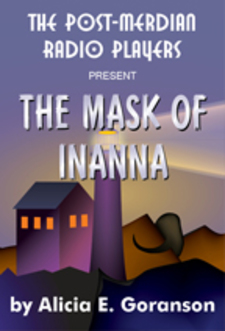 The world isn’t kind to dreamers.

Like any boy of the radio era, Leonard Allen dreamed of hitting big in New York and Hollywood; to write or host that one big show that would make everyone notice. Even after he had his chance at both, that dream still burns inside him. He’s always been able to spark the divine somewhere in his work. And he’s been noticed.

He doesn’t know the lengths people will go to take advantage of such gifts. So when the mysterious David Lewis asked him finish his classic radio drama “After Dark” after a half-century from a pirate radio station in a New England lighthouse, Len didn’t realize it wasn’t as simple as that. The truth is that Lewis served a more powerful entity than even public opinion: the goddess Inanna, Sumerian patron of love and war both.

Journey into the creative mind of award-winning author Alicia Goranson, as she explores the nature of power and those who covet it in a genre-busting work that blends classic fifties radio drama, tense, paranoia-fueled thrillers, and the intimate knowledge born of a career working behind-the-scenes in the performing arts. Marvel at a stunning collection of award-winning stage actors, the Post-Meridian Players, as they provide the voice and heart to a cast of over thirty. Follow Allen and Lewis as their ideological conflict threatens to consume their friends and family, a battle neither can yield.

Is magic simply a tool, or a living thing to be respected? Does man have a right to make demands of the gods? What lengths would you go to for the power to protect what you love? Whatever you believe, don’t get caught out After Dark, in THE MASK OF INANNA.

Listen to The Mask of Inanna

We will send The Mask of Inanna to your Kindle at .

The Mask of Inanna has been sent successfully to your Kindle!