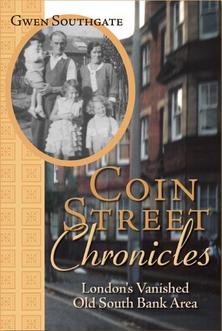 Coin Street Chronicles is a memoir that paints a picture of Britain in the 1930s and 1940s, as seen though the eyes of one for whom it was the backdrop of her childhood.
The story is set in and around Coin Street, on the south bank of the River Thames. The area is now a cultural showcase known as The South Bank, but was then a gritty, Cockney-like corner of London. Stories of its colorful characters are woven throughout the narrative as they cope first with the poverty of the Depression years and then with World War II and its aftermath in the 1940s. Evacuation during the war years entails many abrupt transitions and good-byes—some sad, some glad—and much settling in to new settings that run the gamut from a remote Dorset farm to a Welsh mining town. Even after the war, the author remains a quasi-evacuee for two more years, fleeing from a difficult, violence-prone stepfather in order to continue in school. The memoir ends on the day that she heads off to university, exulting in her escape from the limiting nature of working class culture; but appalled by the wide gulf that threatens to open up between her and her feisty mother whose pluck and determination has been largely responsible for that escape. 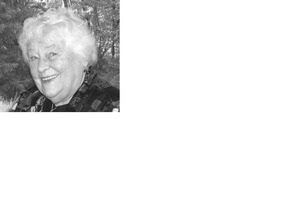 Gwen Southgate was born on Coin Street in what was then a poor, crowded, industrial corner of London on the south bank of the River Thames—definitely the wrong side of the river! She spent her childhood in the Coin Street area during the 1930s and 1940s, but in World War II her horizons widened when she and her two younger brothers were evacuated out of the city to be safe from the Blitz. Getting a good education—with the help of a lot of people—made it possible for her to escape the working class culture in which she grew up, and she has a degree in Physics and Mathematics from London University. She spent five years in an Electronics Research Laboratory before switching to a new career: motherhood—the one career guaranteed to last a lifetime! In 1959, she and her husband came with their young children to the United States, and lived for a few years in Chicago, before settling in the Princeton, NJ, area. After getting a master’s degree from Rutgers University, she then taught physics, chemistry and sundry other science courses for more than twenty years at Highland Park High School, in New Jersey. The leisure that comes with retirement has enabled her to do lots of things that were crowded out in all those busy years—one of which was the writing of a memoir. She and her husband now live in a charming turn-of-the-century house in the village of Kingston, near Princeton, have four children, ten grandchildren, and enjoy exploring the rocky coast of Maine in a sailboat from their small summer house in Cushing.