Some legends are true. It is a myth out of history, spawned by Native American lore and the stories of Spanish Explorers. But what if the legends are true? Former Navy SEAL turned treasure hunter Uriah "Bones" Bonebrake sets off on his first solo adventure in this action-packed novella. When television host Joanna Slater hires bones to help investigate one of Florida's oldest and best-known legends, their crew gets more than they bargained for. Mystery and thrills abound in PRIMITIVE!

Praise for David Wood and the Dane Maddock Adventures

“A brisk read, reminiscent of early Cussler adventures, and perfect for an afternoon at the beach or a cross-country flight. You'll definitely want more of Maddock.” Sean Ellis- Author of Into the Black “A non-stop thrill ride triple threat- smart, funny and mysterious.” Jeremy Robinson, author of Threshold “David Wood has done it again. An expedition that leads down a trail of adventure and thrills.” David L. Golemon, Author of LEGACY, THE SUPERNATURALS, AND EVENT “Ancient cave paintings? Cities of gold? Secret scrolls? Sign me up! A twisty tale of adventure and intrigue that never lets up and never lets go!” -Robert Masello, author of BESTIARY and BLOOD AND ICE “Let there be no confusion: David Wood is the next Clive Cussler. Once you start reading, you won't be able to stop until the last mystery plays out in the final line.” Edward G. Talbot, author of 2010: THE FIFTH WORLD 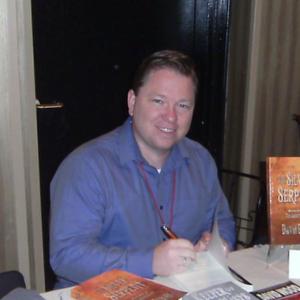 David Wood is the author of the Dane Maddock Adventures and many other titles. He also writes fantasy under his David Debord pen name. When not writing, he hosts the Wood on Words podcast and cohosts Authorcast. Visit him online at www.davidwoodweb.com.