Getting Everything Ready to Record with Audacity

Better Option if quiet with no echo in your computer room.

To do better than just the ATR2100 alone, you’ll want to add a mixer. To connect to the mixer, you’ll use a 3-prong XLR cable. Fortunately, the ATR2100 supports that as well as USB and includes both cables (or at least it did at the time of this writing; make sure that’s still part of the package when you buy, or grab another decent XLR cable of whatever length you think will make sense). The mixer lets you adjust the gain, and adjust the treble and bass to reduce hiss or rumble, and generally optimize the recording for your voice.

You’ll need to adjust these to find what’s best for your voice, but here’s what I found works well for me. I suggest starting with these settings and adjusting the bass and treble levers and mic dial to get it just right for you, your recording room, and the natural added gain and noise of your computer. See #5-#9 in the setup steps below for more on configuring the mixer options: 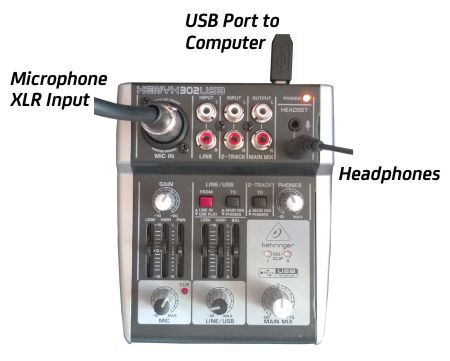 Setting the recording dials and levers: There is no one right group of settings that can apply in all cases. Depending on your voice, differences in your electronics and computer, the line-in recording level on your computer, and background noise in your room, some experimentation will almost certainly be needed. There are 4 controls that affect the recording: the GAIN and MIC dials on the left side of the unit and the LOW and HIGH levers between them.

Record a piece, play it back, make small adjustments and try again until you like what you hear, as described in Recording with Audacity.

If using headphones (we recommend you do), then also follow steps #8 and #9 below.

Next proceed to the Downloading and Installing the Recording Software step. 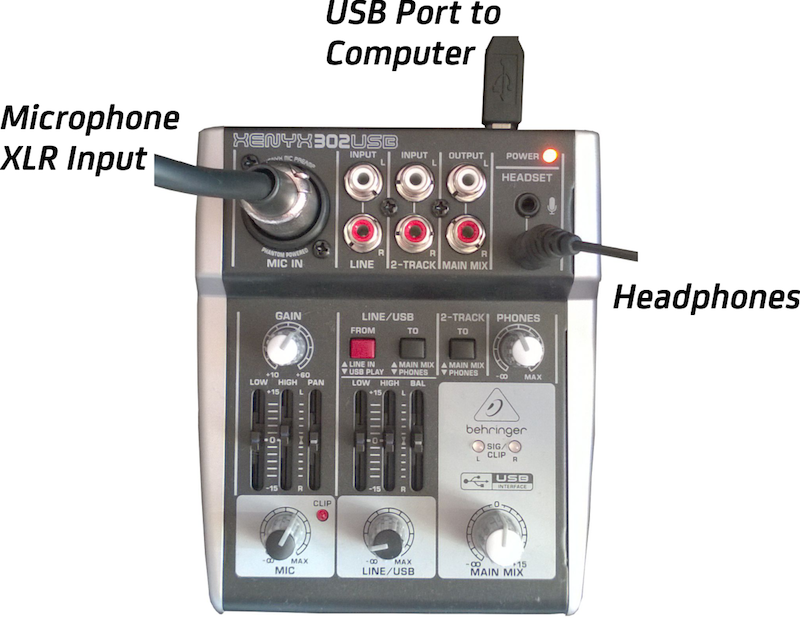