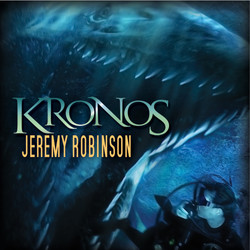 Podcast Audiobook
14 Episodes
557 Minutes Total
Podcast
This legacy Podiobooks.com title is only available as a serialized audibook in podcast form.

Two years after his wife's death, oceanographer and former navy SEAL, Atticus Young, attempts to reconcile with his rebellious daughter, Giona, by taking her on the scuba dive of a lifetime-swimming with a pod of peaceful humpback whales in the Gulf of Maine. But the beauty of the sea belies a terror from the deep-a horrific creature as immense as it is ancient. There is no blood, no scream, no fight. Giona is swallowed whole by the massive jaws. Only Atticus remains to suffer the shame of the survivor and his inconsolable grief turns to an unquenchable thirst for revenge.

Drawn by the spectacle, Trevor Manfred, a ruthless billionaire, approaches Atticus with a proposition: Trevor will make available all the advanced technology of his heavily armed mega-yacht, the Titan, to aid Atticus in his death-quest. In return, Trevor is to receive the beast's corpse as the ultimate hunting trophy. But in the midst of the hunt, Atticus makes a terrifying discovery that changes the way he sees the ocean's creatures and begs the question: what is Kronos? The answer sets him on a new and much more deadly course.

Produced and narrated by Jeffrey Kafer

"Jeremy Robinson peers into the deep. What lurks there is timeless, yet as old as the sea. The fear that dwells in men's hearts has a face and it has come to the surface." – Stel Pavlou, International Bestselling author of DECIPHER and GENE

KRONOS takes a classic theme and turns it into a great page-turning novel that kept me up past the midnight hour. It's a great read blending myth and high tech, with well developed characters you care about. – Rob Kall, Editor-in-Chief, www.opednews.com

"It's not often that you get a fresh perspective on a monster story. Jeremy Robinson fixes us a delicious tale in which he adds one part characters you want to care about, two parts dramatic but believable storytelling, and three parts imaginative adventure in a dish that can be served to adventure, romance, sci-fi and western fans alike. – Clint DeBoer, Editor-in-Chief, Audioholics.com

"… powerful intrigue and wondrous imaginative talent, Jeremy Robinson takes a look at the power of the possible in KRONOS… Robinson does a fantastic job of tantalizing the reader throughout… he pulls on the intricate emotional strains of the story to foster a relationship with a magical possibility wrapped into intriguing situations… KRONOS is sure to set fire to the open imaginations of the world." – Metro Spirit

"Jeremy Robinson possesses a unique talent to take a creature of urban legend, intertwine it with natural history and weave an incredible story of faith, love and adventure." – thenovelblog.com

We will send Kronos to your Kindle at .

Kronos has been sent successfully to your Kindle!