The Guild of the Cowry Catchers, Book 2 Flames (#1) 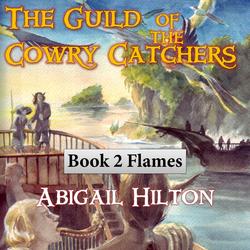 Podcast Audiobook
15 Episodes
462 Minutes Total
Podcast
This legacy Podiobooks.com title is only available as a serialized audibook in podcast form.

He caught the pirate. He did the right thing. He'll regret it.

Captain of the Temple Police is not an easy job. Gerard wasn't expecting it to be easy…but he also didn't expect to have to fight off the Priestess's overtures at every turn. While he isn't against killing, torture seems dishonorable, and a visit to the dungeons leaves Gerard feeling more than a little sympathy for the pirates he's been ordered to capture.

Nevertheless, if he's to protect his gentle, talented wife, Gerard must do his job and eliminate the anti-wyvern pirates. He's made a valuable friend and ally in the wily Admiral of the Temple Sea Watch. Together, they track down the charismatic pirate leader, Gwain, who agrees to meet with them. However, Gwain's chosen site for for their parley is a dangerous island gamepark where the stakes are high, and everyone is prey.

Listen to The Guild of the Cowry Catchers, Book 2 Flames

We will send The Guild of the Cowry Catchers, Book 2 Flames to your Kindle at .

The Guild of the Cowry Catchers, Book 2 Flames has been sent successfully to your Kindle!