The Guild of the Cowry Catchers, Book 3 Ashes (#1) 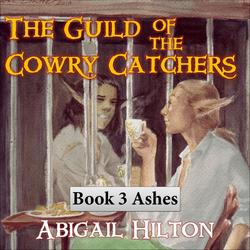 Podcast Audiobook
14 Episodes
469 Minutes Total
Podcast
This legacy Podiobooks.com title is only available as a serialized audibook in podcast form.

They lost everything that defined them. Except each other.

Gerard Holovar, Captain of the Temple Police, was only trying to do the right thing when he spared the life of a pirate. He gambled. And he lost.

Now, mired in grief and choking on despair, he stumbles through days of slave labor, mourning his loved ones and trying to understand where he went wrong. His life as a prince and Captain of Police becomes a hazy memory. When Gerard’s luck finally changes, he emerges from the slave deck of a ship–free, but numb and scarred. He plans to leave Wefrivain, believing that everything he knew and loved is dead.

Gerard may have let go of his past, but his past hasn’t quite let go of him. While struggling to survive as an escaped slave in the wilderness of the Lawless Lands, Gerard finds a friend in even more desperate straits–a friend who betrayed him, a friend he thought was dead. Gerard realizes that, while he could not save everyone, he may be able to save one person. And perhaps here, in the ashes of their lives, there may still be time for second chances.

Ashes is the third book in the Guild of the Cowry Catchers series. The books are:

Embers Flames Ashes Out of the Ashes Shores Beyond the World

The Guild of the Cowry Catchers is a fullcast audio experience featuring the voices of Nathan Lowell, Norm Sherman, Chris Lester, Renee Chambliss, Tim Dodge, and many more.

Listen to The Guild of the Cowry Catchers, Book 3 Ashes

We will send The Guild of the Cowry Catchers, Book 3 Ashes to your Kindle at .

The Guild of the Cowry Catchers, Book 3 Ashes has been sent successfully to your Kindle!