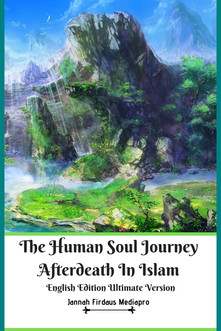 The Human Soul Journey Afterdeath In Islam English Edition Ultimate Version Based From The Noble Quran and Al-Hadith.

Imagine yourself at the moment of your death. What thoughts cross your mind? Memories of family and friends? Panic? Regrets? Remembrance of Allah SWT (God)? What is death? What happens to us after we die? What is life in the Hereafter like, this new and strange world after death? Do we lose consciousness of this life? Where does our soul go? Do we feel and think the same?

The ineffable feeling of crossing the boundary between this world and the next cannot be described in words, nor imagined in the mind, but can be understood only through divine revealation and inspiration. Let us for the next few moments seek an understanding of this, death, the only certainty in life.

Sometimes we may not want to know about the processes that occur after we die because we are afraid or don’t want to think about it. However, this is not the attitude of a Muslim. We should be foremost in learning and understanding death, so we can live our lives accordingly.

The prophet (saw) said, “Live in this world as though you are a stranger or a traveler (passing through it).” [Muslim] We are on a journey and should know about the whole journey’s itinerary, not just one part.

Death is inevitable. It is the one thing that we can be certain about in life. We are born to die. Every soul shall have a taste of death no matter who they are. This is confirmed for us many times in the Quran:

“Every soul shall have a taste of death: and only on the Day of Judgement shall you be paid your full recompense.” (The Holy Quran 3:185)

Death is not pure annihilation, but rather both the living and dead are aware, but there is a difference that can’t be compared. Death is merely movement from one world to another. It can be described as a journey through a wormhole to a separate dimension of existence.