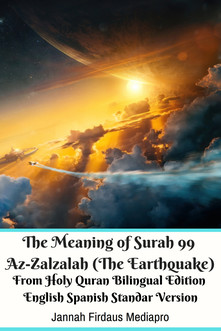 The Meaning of Surah 99 Az-Zalzalah (The Earthquake) From Holy Quran Bilingual Edition In English and Spanish Languange Standar Version. Surah Al-Zalzalah (The Earthuake") is the 99th chapter (surah) of The Holy Qur'an, composed of 8 verses (ayat). Though it is usually classified as a Medinan surah, the period under which the surah was revealed is not unanimously agreed upon by Qur'anic exegetes. The surah begins by describing how on the Day of Judgment, the Earth will give off a terrible earthquake and "throw up her burdens". Through the inspiration of God, the Earth will bear witness to the actions of men it has witnessed. According to Michael Sells, the earth opening up and bearing forth her secrets in this surah is indicative of a birth metaphor. The earth al-'Ard in the feminine gender bears forth of how her lord revealed the final secret to her. Human beings will then realize that the moment of accountability has arrived. This meticulous accountability will reflect good and evil deeds that might have seemed insignificant at the time. The two concluding verses state that all men will be sorted out into groups according to their deeds, and they will see the consequence of everything they have done; every atom's weight of good or evil: That day mankind will issue forth in scattered groups to be shown their deeds. And whoso doeth good an atom's weight will see it then, And whoso doeth ill an atom's weight will see it then. — The Holy Qur'an, verses 99:6-8 (translated by Marmaduke Pickthall) Its theme is the second life after death and presentation in it before man of the full record of the deeds done by him in the world. In the first three sentences it has been told briefly how the second life after death will take place and how confounding it will be for man. In the next two sentences it has been said that this very earth on which man has lived and performed all kinds of deeds thoughtlessly, and about which he never could fancy that this lifeless thing would at some time in the future bear witness to his deeds, will speak out on that Day by Allah's command and will state in respect of each individual person what act he had committed at a particular time and place.

Then, it has been said that men on that Day, rising from their graves, will come out in their varied groups from all corners of the earth, to be shown their deeds and works, and their presentation of the deeds will be so complete and detailed that not an atom's weight of any good or evil act will be left unnoticed or hidden from his eyes.